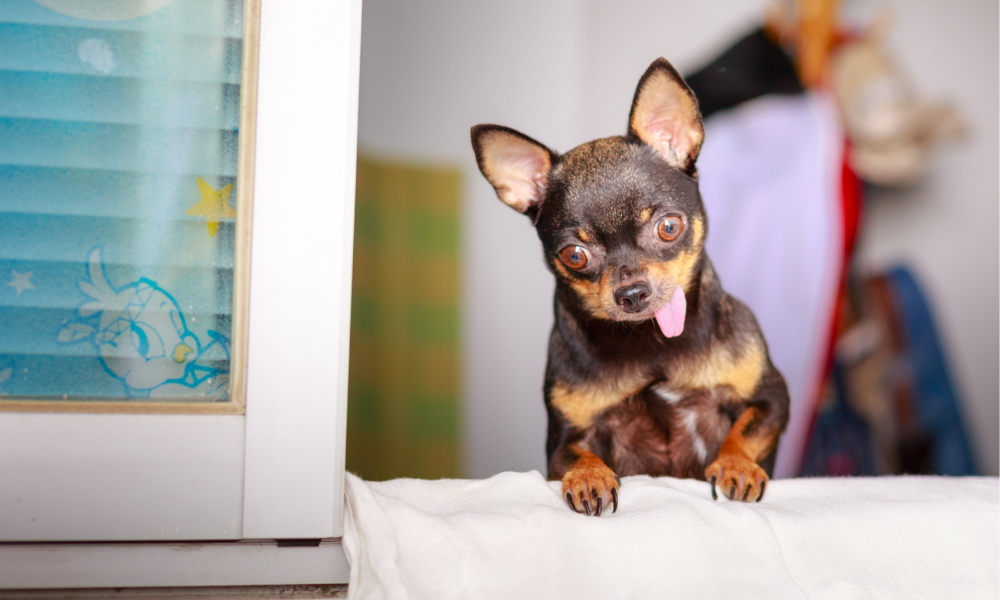 Barking out the window is a common issue with chihuahuas. Not just chihuahuas, a lot of dogs do it, but chihuahuas are very good at it.

They will bark at people walking past, dogs, delivery vehicles, cats. The list can be a long one. Different owners take different views, some don’t mind and consider it chihuahua TV, some like the warning that people are on their property. But for the majority of chihuahua owners the barking is annoying and causes issues in this WFH era.

Are they protecting the house?

Some owners believe that the dogs do it because they are protecting the house and it can look like this, but the reality is they are barking out the window because the activity outside is causing anxiety. To get more out of this article you need to understand the theory behind your chihuahua’s emotional bucket so if you haven’t read it then I would do that now.

Why gadgets are not the answer

You need to understand that your dog makes no correlation between these gadgets and not barking out the window. It may stop them barking in the moment, but longer term it causes more damage than it solves. It adds more stress and anxiety into the situation and damages the trust between you and your dog and could potentially cause a conflict of emotions.

Imagine this. It’s dark, you’re downstairs and your partner is upstairs. A creepy clown face suddenly appears at the window. You scream because, very sensibly, no one likes creepy clowns. The clown gets closer and appears at another window. You scream again and your partner rushes down. But rather than try and soothe you, they shout at you through a megaphone. Then, even though the creepy clown face turns out to be a hamburger wrapper, you would feel rattled and jumpy for the rest of the evening. The event has paid into your bucket, and if something else was to happen you may overreact. This is how using air-horns and squirting water affects your dog.

In addition to adding in more excitement and stress, they may also pair the fear and anxiety these gadgets cause with the activity outside rather than the act of barking, which means a more fearful and overexcited dog out on walks or charging around the house.

The conflict of emotion I mentioned above is your chihuahua becoming wary of you. They want to trust you, but they are never sure of what’s going to happen next. One moment they are sitting on your lap enjoying being fussed, then you lift your hand in a way that startles them and they bite. This happens a lot to owners who punish their dog by smacking or flicking their nose. You must never mentally or physically punish a dog.

There is a simpler more effective long-term strategy to help if your chihuahua barks out the window. It starts with management. Some trainers don’t believe management to be real training. But it prevents rehearsal which is vital to unpicking unhelpful behaviours.

When a dog does something over and over, they get good at it. As they practice it daily it becomes a default behaviour.

They see something out the window and bark as a default behaviour. What we want is, they see it, but it means nothing to them and they are able to ignore it.

Preventing rehearsal means cutting down access to preforming the behaviour. In the case of Prince and Macy we stop access to the front room when we are not there so they can’t just sit and bark at anything that moves.

We also put some static cling frosting across the lower half of the window, while this won’t cure barking on its own it has been a very useful tool. Remember they are worried by the activity out the window. The frosting stops movement catching their eye and sending them into a tizzy.

Building calm around the window. Calm should be a default behaviour in your house. Have in place a calming protocol that will bring down your chihuahua’s overall arousal. This will affect their behaviour and make them less likely to bark at triggers when they are out and at home.

Build a calming cue that can be used in stressful situations, once this is in place, use it around the window. The calming cue is known as DMT or (distract, mark, treat). Build it like a piece of code and then run it when you need it. Use the diagram below to set it up. Once the word nice has a calming effect on your chihuahua you can build it up slowly by using it in and around higher distraction environments. At the moment, to stop Prince barking at people in the street, we have built the cue and will gently introduce it in more populated environments, like the edge of a supermarket car park.

Catch them doing nothing or Ninja feeding

This is a very simple training method, but it does require you to have pockets full of food. It looks like this. Your chihuahua is sitting doing nothing, they are calm and quiet. This is what we want from them, so to get this message across we are going to reward this. Quietly and without a fuss feed the bed or whatever they are sitting on. It will build up value in this as a concept and position.

These are some basic strategies that should help reduce barking out the window. But they take time to put in place. It’s always tempting with dog training to go for the quick fix. But quick fixes cause other issues and damage your relationship with your chihuahua.

Would you like more information about a 121 online behaviour consultation . Just drop me a line and I’ll come back to you.