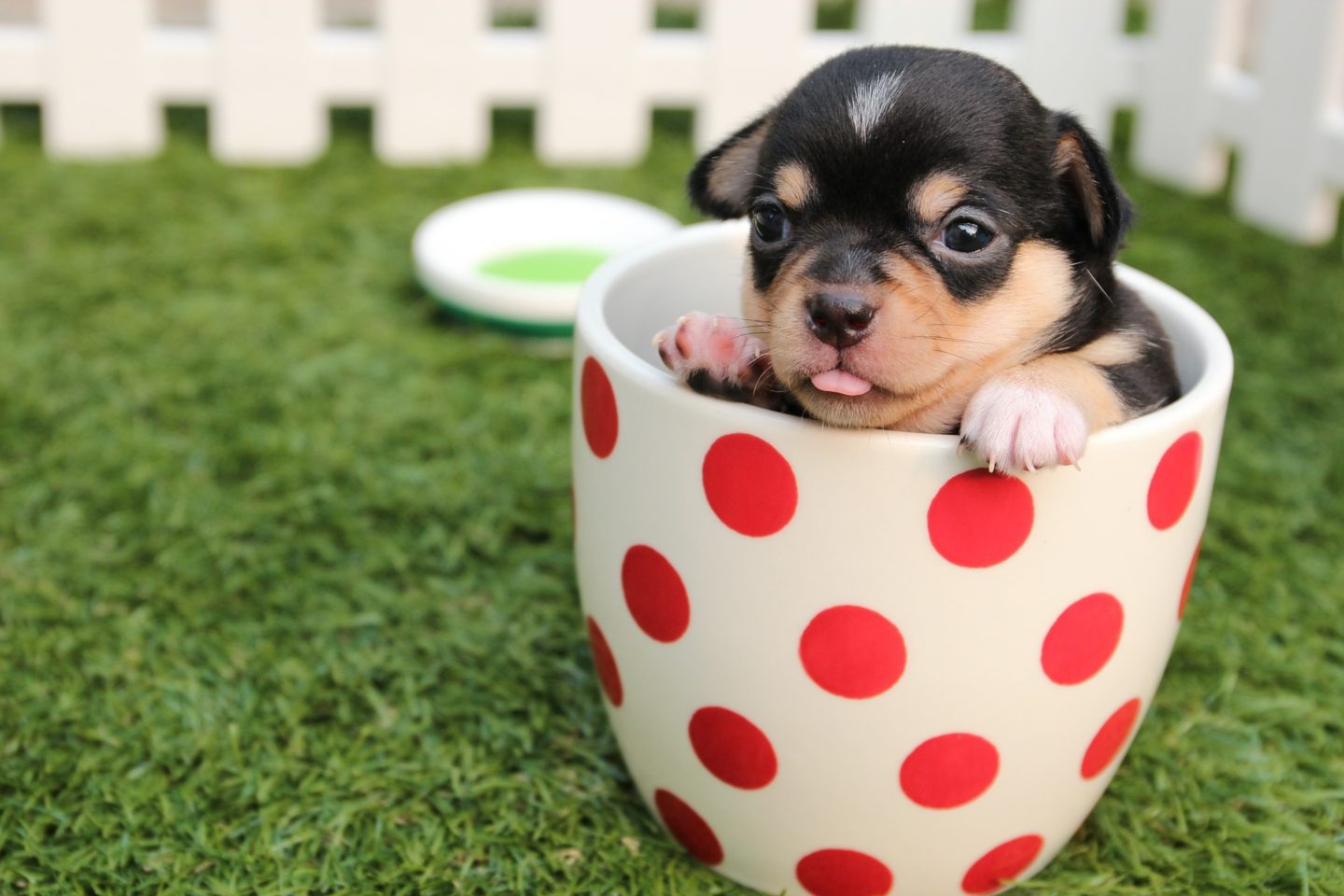 The craze for teacup chihuahuas.

Chihuahuas are not the only breed that are being miniaturised. It’s happening to Beagles, Maltese and Yorkies. While researching this article I even found a discussion about a teacup Great Dane!

The craze for miniaturisation

The miniaturisation of chihuahuas and other dog breeds is becoming increasingly common. The craze is being driven by social media and celebs like Paris Hilton and Britney Spears. This celebrity endorsement fuels the market and some puppies can command a price tag of $10,000. With this kind of money changing hands the breeding of tiny chihuahuas is now big business.

Breeders and vets are becoming increasingly worried about rise in the breeding of these dogs. Health issues are common: liver shunts, hydrocephalus (water on the brain), heart problems, and respiratory problems. Hypoglycemia (low blood sugar), is another serious problem for the teacup, and can cause seizures and death if not monitored. Because of this, some will need to be fed several times a day.

They are also extremely fragile and prone to broken bones and this makes them totally unsuitable for a family with young children.

Chihuahuas are naturally small dogs: The Kennel Club ideal size is weight: up to 2.7 kgs (6 lbs) and even that seems small. Reducing the size of a large dog by one or two pounds is no big deal but to an already small chihuahua it can have a massive impact on their health.

The Kennel Club does not recognise any teacup breed, and will not record dogs as being ‘teacup’ on its register.

With the rise in popularity and the hefty price tag breeders can command, there is a scramble to breed these dogs. What would once have been described as the ‘runt’ of the litter or the smallest dog is now the most prized. These tiny dogs are then bred with other runts to produce a guaranteed litter of tiny pups.

The problems start here for the puppies, as normal sized puppies are in the gene pool there is no guarantee that the pups won’t be too big for the bitch to whelp successfully and she will die trying.

The conditions that these puppies are bred in is vile. Bitches can be malnourished and the pups regularly delivered prematurely by C-section to ensure they are small. After all this suffering the pup may well grow to be a normal size and face being abandoned.

South Korea (not known for their affinity with dogs) and now Eastern Europe are prolific suppliers of teacup chihuahuas. They are produced on puppy farms or mills and then sold to America and the UK though slick boutique websites and shipped as cargo. Just do a basic internet search. Because of the hypoglycemia problems and the long-time they will be crated in air freight without food and water, many will not survive the journey.

The other issue with these tiny dogs, is the lack of a natural upbringing and the all-important socialisation. A good breeder will work hard with their litter and make sure the pups are socialised. All dogs need to be properly socialised as pups, but chihuahuas especially, will suffer if they are not brought up properly. What happens, instead of the cute cuddly tiny dog, they end up with a biting, aggressive tiny chi-ziller and they get dumped.

Chihuahuas can be stubborn, wilful, and prone to biting. They are not always suitable dogs for the first time owner. People who seek out miniaturised dogs on purpose are probably not the sort of owners who are going to work with them on behaviour and training. These dogs just toys and playthings to be dressed up and spoilt (literally) turning them into unsociable aggressive terrors.

It’s not just imported dogs being bred for this cruel supply chain. Unscrupulous breeders in the UK are also keen to cash in. Puppy farms and breeders deliberately choose small stock and often breeding through incest to improve the chances of the pup being small.

How can a nation of dog lovers allow this to happen?  No animal should be used as a fashion accessory. It feels like the fur trade all over again.

Under some new recent legislation it will be illegal to buy animals that are through a third party (Lucy’s Law) and it is illegal to breed dogs with ‘cute defects’ such as over flat faced boxers, rag-doll cats and super tiny chihuahuas.