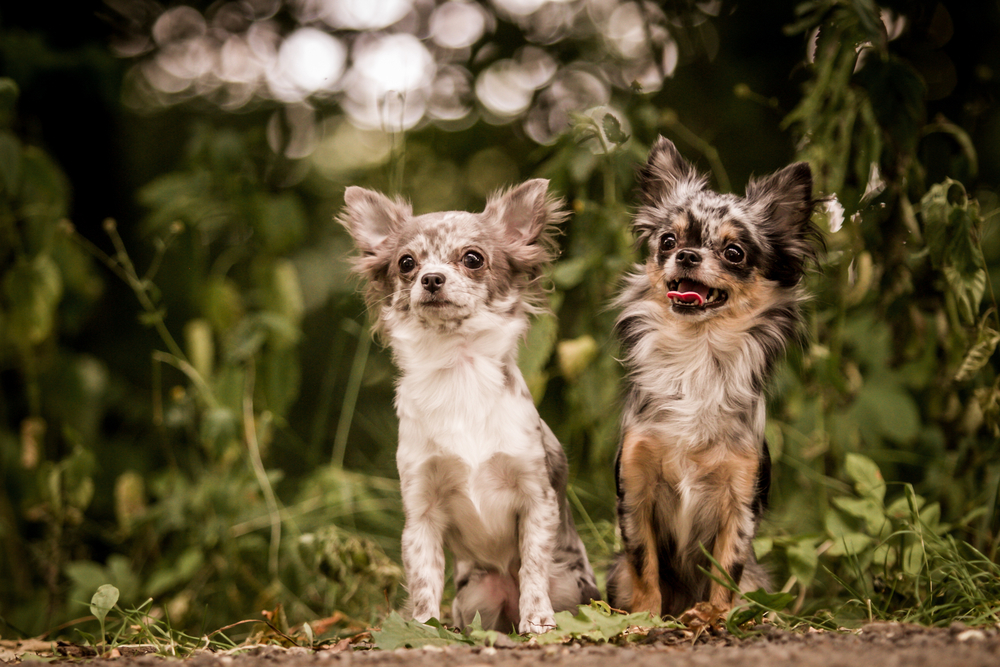 What is a merle chihuahua?

We have had some lovely photos of merle chihuahuas sent into the blog. They are such an unusual colour combination that we thought it would be good to look at the history of this pattern. Goodness me what a hotbed of intrigue we uncovered. Who knew that there was so much controversy over the merle chihuahua!

What does ‘merle’ mean

Merle refers to the unusual colouring of the dog’s coat. Sometimes referred to as dappling. It is the result of a gene modifier that changes the pigmentation at the base of the coat. The result of this gene is the unusual light and dark patches. The chihuahua may also have blue eyes.

Why is a merle chihuahua controversial?

The Kennel Club no longer allows the registration of the merle chihuahua although it has done in the past. Some argue that the merle pattern has been present in chihuahuas since the 1940s and the kennel club has been Ok with it for 70 years so to suddenly decide they are cross breeds now is a bit harsh.

Completely contrary to the above view others state that the merle chihuahua has only been around for 15 years and has been specifically bred to produce an unusual colour combination to appeal to buyers. They suggest that merle chihuahuas can be prone to specific health problems that are directly related to the merle gene.

Do merle chihuahuas have health problems?

There is some debate and opinions differ on this. Some suggest that the merle chihuahua will have health issues such as sight problems, hearing issues and possibly sperm deficiencies. Similar suggestions of ill health are associated with blue chihuahuas as well and it is suggested that you do not breed from two blues. Although the Kennel club does allow the registration of blues.

It is for reasons of health issues that the kennel club state that they do not allow the registration of merles. (Taken from their website)

‘’With effect 01 March 2009, the Kennel Club will no longer register puppies whelped from a merle parent, mated on or after this date. This is because the merle gene in this breed carries an increased risk of impaired hearing and sight problems.’’

Others suggest that there is no more risk in breeding merle chihuahuas than any other breed if it is done responsibly. That problems only start to occur when two merles are bred together (known as MM.) The feeling is that if the parent is healthy and only one parent is a merle (Mm) then you have no more risks than any other merle dog breeds.

Do you have a ghost merle?

It is possible to have a merle chihuahua and not know. If your chihuahua is light in colouring the light pigmentation that occurs with the merle gene will not show. These are called ghost or phantom merles.

If your puppy is healthy then no. If she has blue eyes there might be a sensitivity to bright sunlight. Some suggest that your merle chihuahua could be slightly larger than average.

Not especially, but there is always going to be breeders who jump on the popularity bandwagon and charge over the odds for this type of colour marking. If you are buying a merle do check the parents are not both merle and be aware that you won’t’ be able to register your dog. Similarly, some breeders go out of their way to suggest they are more responsible by not having merles in the bloodline.

However, the clampdown on this coat colour seems to continue and you are not allowed to show him at formal dog shows.

So, there you have it. You pay your money and take your choice.

We would love to have your opinions about merles, do you breed them or do you own one? Have they had health issues? Please leave your comments below.

22 thoughts on “The Merle Chihuahua. Why the controversy?”